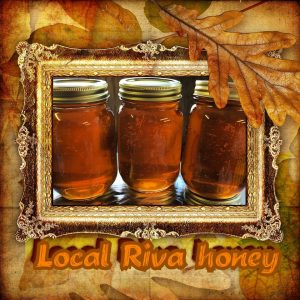 All honey bees are social and cooperative insects. A hive’s inhabitants are generally divided into three types.

Workers are the only bees that most people ever see. These bees are females that are not sexually developed. Workers forage for food (pollen and nectar from flowers), build and protect the hive, clean, circulate air by beating their wings, and perform many other societal functions.

The queen’s job is simple—laying the eggs that will spawn the hive’s next generation of bees. There is usually only a single queen in a hive. If the queen dies, workers will create a new queen by feeding one of the worker females a special diet of a food called “royal jelly.” This elixir enables the worker to develop into a fertile queen. Queens also regulate the hive’s activities by producing chemicals that guide the behavior of the other bees.

Male bees are called drones—the third class of honeybee. Several hundred drones live in each hive during the spring and summer, but they are expelled for the winter months when the hive goes into a lean survival mode.

Bees live on stored honey and pollen all winter, and cluster into a ball to conserve warmth. They Try to keep their hive at around 98 degrees.  Larvae are fed from the stores during this season and, by spring, the hive is swarming with a new generation of bees.

Riva Gardens Honey: it is almost that time of the year.

Keep Checking in on us and we will let you know when our Local Honey will be ready. 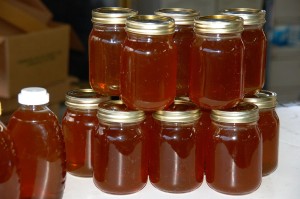 Honey is made from plant nectar and not from pollen. Bees have two stomachs. One is used for digesting food and the other is used for collecting nectar. Bees suck up nectar from flowers and collect it in their nectar stomach where enzymes are added to the nectar. The result is that nectar is broken down into simple glucose and fructose. The transformed nectar is then regurgitated into the bodies of worker bees in the hive for further processing before it is put into cells of the honeycomb for storage. The partially digested watery nectar is vigorously fanned by the worker bees to evaporate excess moisture. Finally, once the honey has thickened into a sticky sugary substance, the bees place a wax cap over the cell of honey to preserve it for long term storage. A single worker bee produces only 1/12th of a teaspoon of honey in its lifetime.

Bees also gather pollen to make bee bread, which is the honey bee’s main source of protein. Bee bread also provides fats/lipids, minerals, and vitamins.  The bee bread is mostly used to feed young bees. The worker bees in the hive process the pollen into bee bread and store it in separate honeycomb cells in the hive to preserve it. The bees do not intentionally mix honey and pollen in the same cells. The honey is the food that bees will live on during the winter when they cannot forage for nectar and pollen. There can be large amounts of loose pollen in a beehive. It commonly clings to the hairs on the legs of bees. The activity of bee movement in the hive causes pollen to become airborne and it can fall into the open cells of unripe honey that are in the drying process. 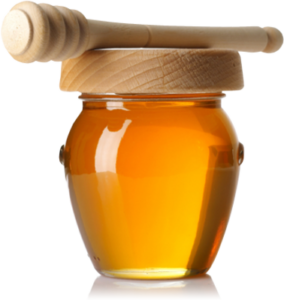